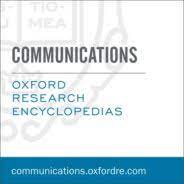 My chapter Paywalls and Pay systems,  has been published in the Oxford Research Encyclopedia of Communication. Here is the summary:

“Funding of journalism has become a critical part of journalism and digital journalism studies because no single business model has emerged to solve revenue problems for print and digital news outlets. Despite newspapers’ efforts to expand their income sources, they have remained print reliant in terms of revenue. In 2017, approximately 80% of global news publishers’ revenue still came from print products. While some large news corporations such as The New York Times Co. and News Corp have reported substantial increases in their digital subscription numbers, revenue from subscriptions and digital advertising has not been substantial enough to fund their newsroom structures and journalism.

In this context, academia has started to produce more research on news payment systems. Recent studies of payment systems have largely concentrated on people’s willingness to pay for news. Academic researchers have also studied paywall models, content, and revenue. Additionally, crowdfunding as a source of revenue for news has been investigated, and the research on membership models is expanding. Most of the studies about news payment systems have concluded that none of the news payment systems—including paywalls, micropayments, donations, and memberships—is (on its own) sustainable for funding future journalism. Paywall can be understood as a subscription model that limits the public’s access to all or to some digital news content without a payment. Micropayments allow readers to pay per article or per view. Memberships allow the public to access certain content (premium content) or extra services such as events for a fee. Donations refer to the public’s voluntary monetary contributions to produce news articles or projects to the news sites.

News publishers have become increasingly dependent on social media platforms such as Facebook for their content distribution. However, there is still very little academic research about news payment systems related to Facebook or other social media companies. This may well be because there is no transparent information about this kind of revenue as the news industry itself is not reporting on it.”

To view the chapter, visit here.